This month MA Drawing students had a group show at the Centre for Recent Drawing (C4RD)and then installed that show in the Centre for Drawing at Wimbledon just for the evening of the Private View of the MFA and BA final show. And ASC Kingston, where I have my shared studio, had an Open Studios over 2 weekends as part of a Kingston-wide event. So I’ve been choosing/installing/uninstalling/reinstalling and talking about my work (and other people’s) non-stop.

Here are some shots of the C4RD show with my work: 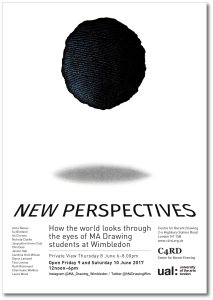 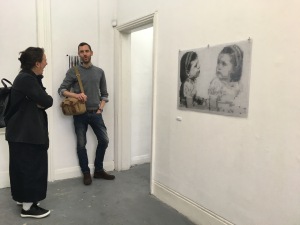 and here it is installed in the Centre for Drawing: 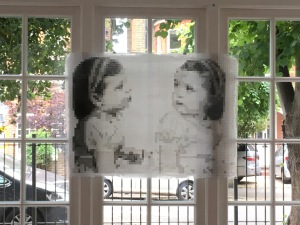 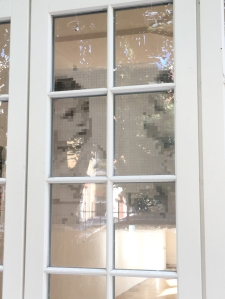 At the Open Studios, some artists set their space up as a mini-gallery, but we decided to go for the ‘working studio’ approach: 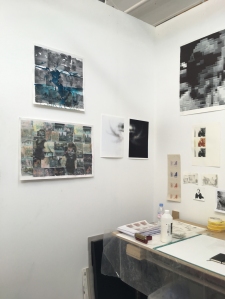 It’s not news that it is tiring to be ‘on show’ all the time and to talk about your work. Because none of these was a selling show, I didn’t have to think about prices, sales and full-on marketing. So what was the point?

Group shows are always a chance to hang some work, with other people’s work, and thus get a different perspective on a piece. Hanging the same piece in 2 venues in one week was illuminating: the way the light changed the piece when it was installed in the window at Wimbledon gave it an extra, sometimes unexpected dimension.

These events are an opportunity for us to see each other’s work too, so the first critics are your fellow students. The next critics are the Private View visitors, largely the family and friends of others in the group. So they are probably a bit more interested than the man in the street. And they are generally looking to engage in conversation or will signal clearly that they aren’t!

At the Open Studios, you get those groups but also local people who are interested in art and like to meet artists and local people who are just nosy or looking for something to do on a sunny Sunday afternoon. It was my first experience of doing an open studio, so I found it harder to gauge how much people wanted to chat. When they did, the conversation and the reactions were quite similar whether the visitors had an art background or not. It’s rewarding in one way for other artists to want to talk with you about your work, but there’s still something special when a member of the public ‘gets’ what you are trying to do and sometimes reflects it back to you.

Perhaps because my focus is still the MA, 4 days of open studios was too much. 2 days would have been quite enough to get some reaction, practice my engagement and presentation skills, and just see what people are interested in. But I may feel differently next year, when I’m free of academic work and out on my own.