The Biennale: Part 1 – Pavilioned in Splendour

I’ve just got back from my first visit to the Venice Biennale. There’s so much to say that it’ll take more than one blog post. So I’m starting with one about the national pavilions – and it’s long, so settle in.

I have to confess straightaway that I didn’t have the stamina to make it into everything and in fact I managed to miss whole sections of the Viva Arte Viva pavilions curated by  Christine Macel. This is therefore not survey, more a selection of things that got my attention.

In the Russian pavilion Grisha Bruskin showed Scene Change, which comprised lots of white sculptures at various scales of things including a two-headed eagle, strange dolls, little marching men, soldiers, androids half human and half mechanical, miniature zigurrats, and communist symbols. The whole work was about ‘concepts of power, fear, and control of the masses’ and what really brought it together was a magic-lantern style video projection that played every few minutes. This brought some of the figures to life and created a sense of Big Brother style mind-control.

Mark Bradford’s show in the US pavilion included some of his layered-and-sanded work but also some new pieces made with hair dye and the kind of thin square papers used by hairdressers. Given my obsession with grids and squares, I rather like the results but I don’t think they have the same potential to generate meaning.

Here’s an image from the Israeli pavilion of part of Sun Stand Still by Gal Weinstein: this pattern is created by growing mould on varying substrates. There were mould patterns on walls, floors and ceilings which all grew and changed as time passed, illustrating that we cannot entirely control organic processes.

And here’s one of Werken by Bernardo Oyarzún and Ticio Escobar in the Chilean pavilion. (The red glow is from LED projections on the walls.) 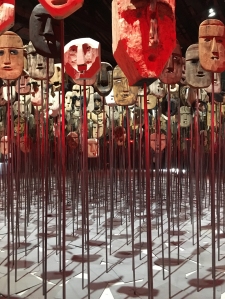 This was in a long chain of pavilions in one of the buildings of the Arsenale and what made it stand out is the way it occupied the space and directed both the movement and attention of visitors. Some pavilions were more like white cube gallery spaces and these didn’t always succeed in terms of helping the weary visitor to engage with the work.

Some pavilions were a lot of fun and high up the list would be Austria where Erwin Wurm had installed a number of ‘one-minute sculptures’: stage sets where the action of the visitor creates the sculpture. Here’s my lovely assistant following the instructions for a couple of them. 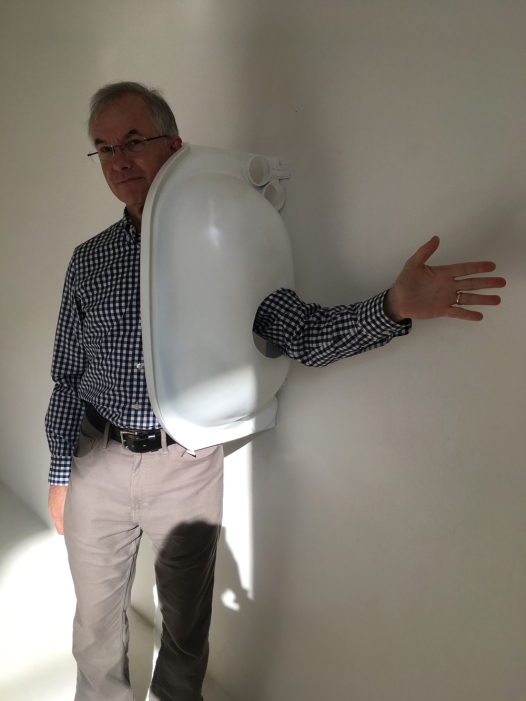 My top pick of the national pavilions was the Italian one or at least the work of 2 of the 3 artists on show. Imitazione di Cristo (The Imitation of Christ) by Roberto Cuoghi ‘investigates the transformation of matter and the fluid concept of identity through a research on [sic] the historical depiction of Christ in Italian art.’ He turned the pavilion into a sort of workshop, producing a kind of devotional statue inspired by the De Imitatione Christi, a medieval text describing the path to achieve a state of ascetic perfection. The statues were then moved onto tables inside a long transparent plastic tunnel with side rooms. So as you walked through you encountered a sequence of “bodies” in progressive deterioration. I don’t know what the statues were made of but they really were mouldy, disintegrating and quite disturbing because of their uncanny appearance – between human and non-human. And then at the end, like a gory Silent Witness scene, you came to a long dark wall, with the remains of the figures, distorted and broken to pieces, and arranged like a series of Calvaries.

When we were there, a party of German students came through and were fascinated and appalled by the ‘yuck’ factor, while I was struck by the fragility of the figures and the foretaste of the inevitable end of human life.

The third artist Giorgio Andreotta Calò created an enormous installation, set into and making use of the architecture of the pavilion, in a massive brick-built space in the Arsenale. When you first walk into Senza Titolo – la fine del  mondo  (Untitled- the end of the world) it just looks like a lot of scaffolding which leads to wide stairs leading up to – well, it isn’t clear. But when you get up there and turn around you are confronted by a vast and confusing view.

It took me a while to realise that I was seeing the roof timbers reflected; and then that there was a mirrored wall across the width of the space, so the reflection is double horizontally too. And only when I read the blurb later did I find out that the reflective surface is water, though somehow it remains so still, without a single ripple. It’s a simple idea but carried out in a place and in a way that is very powerful.

Some of the pavilions are outside the main venues, the Giardini and the Arsenale.  I didn’t think there was any general difference in quality between the pavilions outside which were free to visit and those inside which you have to pay to visit. Two of the external pavilions that I particularly enjoyed were the Diaspora and the Syrian.

The Diaspora Pavilion presents the work of 19 artists whose practices ‘connect to different diasporic experiences’. The pavilion and the curators, from the International Curators Forum, positions itself in opposition to the idea of a permanent national pavilion, in a space where transition and passage may be more important. I wanted to see the drawings made by Barbara Walker for the pavilion. She generally works by making large charcoal drawings directly onto the walls of whichever space she is showing in. Here she made a series of drawings in the stairwell of the Palazzo Pisani Santa Marina. Transcended depicts men and women soldiers from the Commonwealth who served in World War 1. Walker is commenting on both the general aspects of war – fighting for your country, war as rite of passage … – but also on the neglected history of black soldiers who even in war were treated as second-class. These beautiful drawings are a celebration of their lives and contribution. 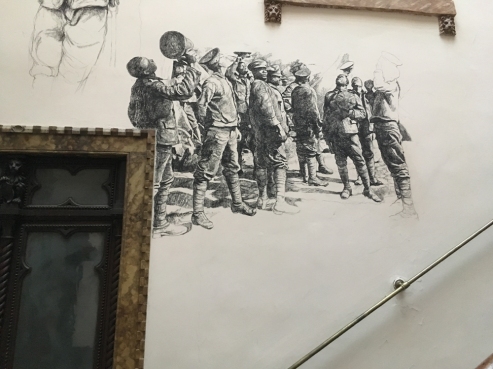 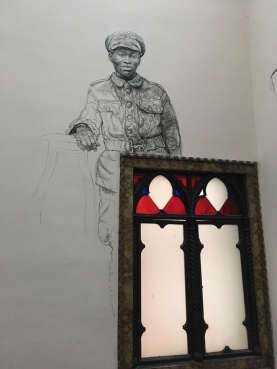 Yinka Shonibare showed The British Library, which consists of thousands of books, presented in wooden bookcases. Each one is covered in batik Dutch wax print and how on the spine the name of an immigrant who has made a significant contribution of British life and culture.

What interested me is the wide scope of the immigration he considers, including first and second generation migrants with European or American ancestry like Winston Churchill, Helen Mirren and even Prince Philip. On that basis, even I would qualify as an immigrant (though you might quibble about my contribution …). Or as I often think when surveying my family and friends, you don’t have to scratch far below the surface of someone who looks white British to find an immigrant.

And finally … the Syrian pavilion is on the Giudecca, where we spent a leisurely morning.  A mix of Syrian and Italian artists were showing under the title Everybody admires Palmyra’s Greatness. The works that stayed with me are direct responses to the devastation in Syria; sometimes we just have to deal with what is right in front of us. 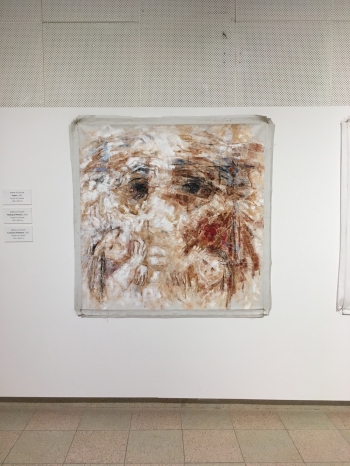 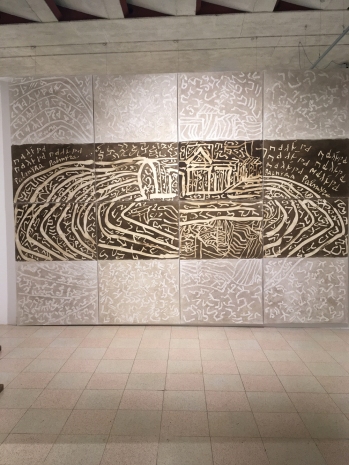