I’ve been working on a set of drawings that allowed me to deal with several things that had been on my mind:

The buried book was a response to an exhibition in 2010 at the British Museum about the Egyptian Book of the Dead. These ancient books were ‘compilations of spells designed to guide the deceased through the dangers of the underworld, ultimately ensuring eternal life.’ They were made individually but I think that only wealthy people had a truly bespoke version.

I decided to make a Book of the Dead for my father with text not so much about the underworld, but more about the things I wished I had said to him, that might have had some value or purpose, while he was still alive. I used remnants of other hand-made books as the pages. I used the Chinese whirlwind style of binding which looks like this. I rolled the book up, like a scroll; wrapped and tied it in linen, as the Egyptians did; and buried it in my garden – not quite like the Egyptians, but you get the idea.

I wanted to know what would happen to the book over time. So in fact I made two versions – a mock-up which I could dig up after a while to see how things were going – and ‘the real thing’ which I could leave longer if need be. I dug up the mock-up after about 3 months and immediately realised that I should dig up the real one as well, or I might very well have nothing much left! 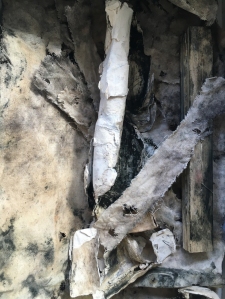 I unwrapped the mock-up and what I got was a pile of very dirty linen, some dirty wet wood (the strips that held the book pages together at the top); and lumps of, effectively, papier mâché – the parts of pages that survived were melded together into curved lumps. It all looked like this.

I didn’t know what to do with it.

Fast forward several years, to my time at Wimbledon, and my research into the use of remembering and forgetting in the creation of the narratives of our lives. One thing that struck me, as someone with relatively few memories of childhood, was that more ‘facts’ wouldn’t necessarily illuminate what my childhood had been like.  This was linked in my mind with thinking about how I draw and particularly my lack of confidence in being able to make detailed realistic drawings of things. I wanted to use drawing to illustrate the limitations of factual information as a source of meaning.

My interest in silverpoint came first from an exhibition at the British Museum  in 2015 which was my first introduction to the medium. After our group visit in 2017 to the British Museum Prints and Drawings Department and continuing visits in 2018, I wanted to pursue the classical tradition of learning by copying and learning from the masters. I thought that drawing with silverpoint would be a good starting point.

At the same time, I wanted to look into archaeological drawing techniques, another leftover from the MA course that I never quite got round to. I quickly realised that making drawings using purely those techniques would not fit with my other intentions. Archaeological drawings contain at once more information – especially about size and scale – and less information – about wear, tone and marks – than I wanted to include. But some of the conventions about how to show surface, and what to leave out were useful. I also decided that I would follow the convention of drawing ‘life-size’.

And lastly, I had been successful in applying to be included in the SFSA Drawing Open 2018. All I had to do was make some work much smaller than my usual scale. The fragments of unwrapped book drawn life-size would fit the bill; and the need to make work to the deadline would help me get on with learning to use silverpoint.

I chose some of the more interesting fragments and did test runs using graphite (helped by my latest gadget: magnifying lenses you can wear as a headset – glamorous no, but useful!). For the drawings themselves, I chose some hand-made cotton rag paper that I had forgotten I had and came across while tidying up. I bought it at the 13th century paper mill, now museum, in Amalfi, providing a link with my father’s Italian origins (albeit that his family came from much further north in Emila-Romagna).

I’ve made five so far, and I think the set achieves what I had in mind, at least for now. I think the fragments are ambiguous and mysterious, lending themselves to many interpretations. But even though I have drawn them thread by thread, they can’t tell you anything about my relationship with my father. Though as a friend pointed out, the fact that I have undertaken such an elaborate project tells you a lot.

I’m aware that I still haven’t unwrapped the ‘real’ book and since I don’t know exactly what I’ll find or what I will do with it, I need to document the unwrapping carefully, as it’s irreversible.